Investors should always remember that producing investment products is a business just like any other and a good marketing story is just part of that process.

Having come through the market declines of 2007-2008 many investors were understandably concerned about investment risks and the Financial Services Industry turned its attention to the manufacture of plausible stories in order to be able to persuade savers to part with their cash.

Some of the themes that emerged during this period included; “The world is going to hell in a hand-basket- you need to put all of your money in precious metals”. “Markets are just too risky for ordinary people so cash is king”. “Hey, property looks really good value right now” – (How quickly we forget) and of course “Hey, trust us we have it all figured out, we can protect you from risk with our absolute return strategies”.

Jason Zweig, who is a columnist with the Wall Street Journal put all of this into context when he said;

“The perennial refrain from critics is: You just don’t get it. Internet stocks / housing / energy prices / financial stocks / gold / silver / bonds / high-yield stocks / you-name-it can’t go down. This time is different, and here’s why…

In this statement Jason captures perfectly the essence of the problem that we face when seeking guidance about how to invest and it is this; everyone has an agenda which they promote with a story and most of these agendas contain conflicts of interest.

Savers too have an agenda. They want to get the best return on their money possible, but don’t want to take investment risk. That is why they are savers in the first place. So, they keep most of their money on deposit with banks where it is exposed to the risk of default if they have more than €100,000 in a single account and the constant and merciless destruction of their wealth due to the steady grind of inflation and taxes.

Eventually, one of two emotions eventually pushes a saver into making an investment decision and this is typically either the fear that they money isn’t safe anymore. Either they worry that the bank might fail or more recently that the Euro might fail or Brexit or Trump or whatever news story has grabbed their attention. Or they feel that they could do better, that is to say greed kicks in and they fall prey to the marketing machine.

Many savers are persuaded that what they need is a tracker bond. A structured product combining a bank deposit for most of their money, just like the one they were in moments before, sometimes even with the very same bank as it turns out. This bank deposit returns their money (with no interest) at the end of a pre-determined period. The balance of their money is used to pay “distribution costs” that is to say commissions and expenses.

A small part of their money is used to purchase an option (you can think of this like a bet) typically on a basket of shares or indices which have been selected both due to the price of the option (the odds) but also to create the marketing story about where you are “invested”. I put “invested” in inverted commas because you are not really invested at all. You have no claim over the underlying investments since at the end of the pre-determined term you are back in cash again with no right to participate in rent, interest or dividends from the underlying basket of securities.

Naturally, the adviser typically doesn’t explain matters such as participation rates or the Black Scholes Model for pricing options. Well, they don’t need to do they? Our saver is mostly interested in the fact that it is guaranteed to give you your money back (unless the counter party goes bust like in the case of Anglo Irish Bank or Lehman’s) and there is some headline number that makes the whole deal look attractive – think of this last bit in the same way you should think about buying a prize bond – money safe, and very tiny possibility of doing better than the interest I would have received anyway if I had just stayed where I was.

Of course, few savers are able to calculate the probabilities necessary to determine their “expected return” from the product and even fewer would even bother to ask why it matters. After all they have already been drawn in by a well-documented human preference for downside insurance to protect us from loss and lottery-ticket like (i.e. highly improbable) upside potential.

But most savers don’t think like this. They see “guaranteed” and” headline return”. The financial Services Industry knows this and they exploit it.

I won’t propose to even begin to try and explain what is going on under the bonnet so-to -speak with all the financial engineering that goes into these products. Although it should be noted that investors sometimes confuse complexity with the right way to invest. This seems clever, so it must be good.

However, as legendry Fidelity Fund Manager Peter Lynch reminds us you should;

“never invest in anything you can’t illustrate with a crayon”

The basic marketing story for absolute return is exactly the same as the Tracker Bond above but just involves a different “solution”. This time we are told that the fund manager has got it all figured out and can provide you with an “absolute return”.

Even the name “absolute return” is interesting and I wonder how many consumers interpret this as meaning “always positive returns”? It doesn’t of course, but there has to be a risk that some will see it that way.

With all of the marketing hype around Absolute Return strategies recently focusing on how these were different to more traditional methods of investing, surely, we should have expected to see these funds perform significantly differently to traditional investment portfolios?

What I find interesting then is that when I look at the actual performance of a fund, the footprint that it leaves behind if you like; I see very little difference between a structured market portfolio of low-cost index funds and an absolute return strategy[1]. 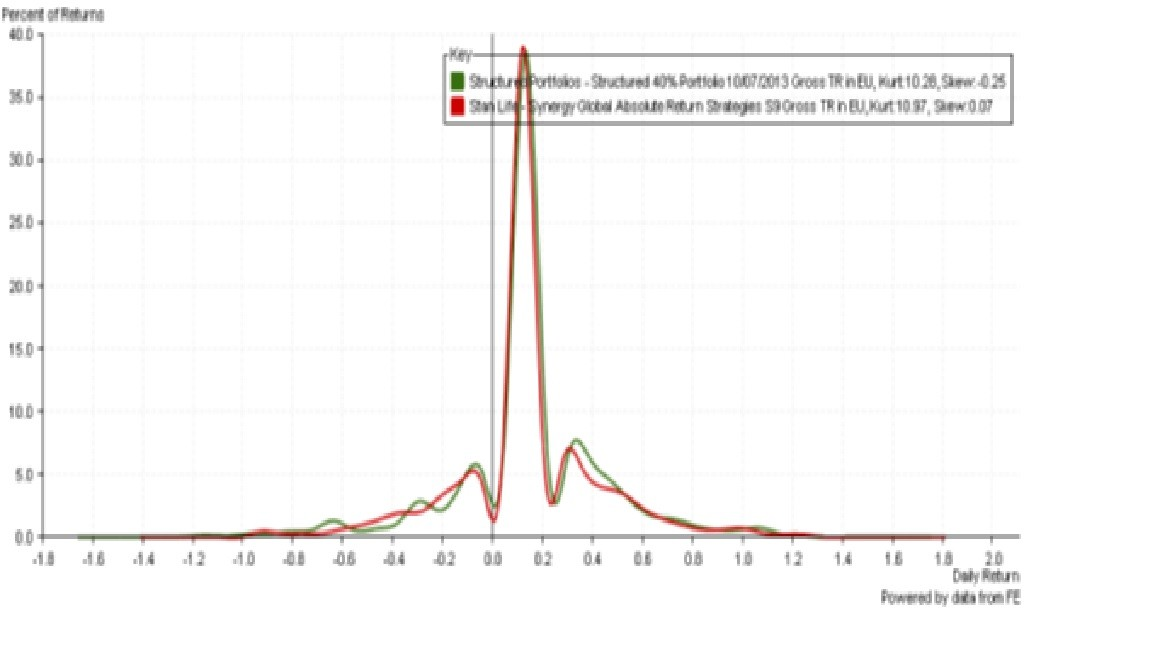 The graph shows the distribution of daily returns over the period 3rd September 2008 to 17th July 2013 for the Standard Life Global Absolute Return Strategy (GARS) and a relatively naive Structured 40% Risk Portfolio of low-cost indexes. I originally completed this analysis at the time and my conclusion was that GARS looked like a 40/60 portfolio with a side bet at paddy power.

Now, I can explain exactly how the 40% Risk Strategy works – it’s very simple, you just invest 40% into risk assets (equities and real estate) and 60% into safer assets (cash and fixed interest). But what I can’t explain is why so much money went into Absolute Return Strategies during this period, growing to over £55 billion (€65 billion) at its peak in August 2016.

0.61 is a low correlation suggesting that there are some differences and some similarities between the two strategies. They are not identical. But when we look at the distribution of returns there really isn’t much to separate the two. Which begs the question; “what are investors paying for?”

I thought it would be interesting to revisit the analysis that I originally penned in July 2013 to see if anything had changed in the world of investing. 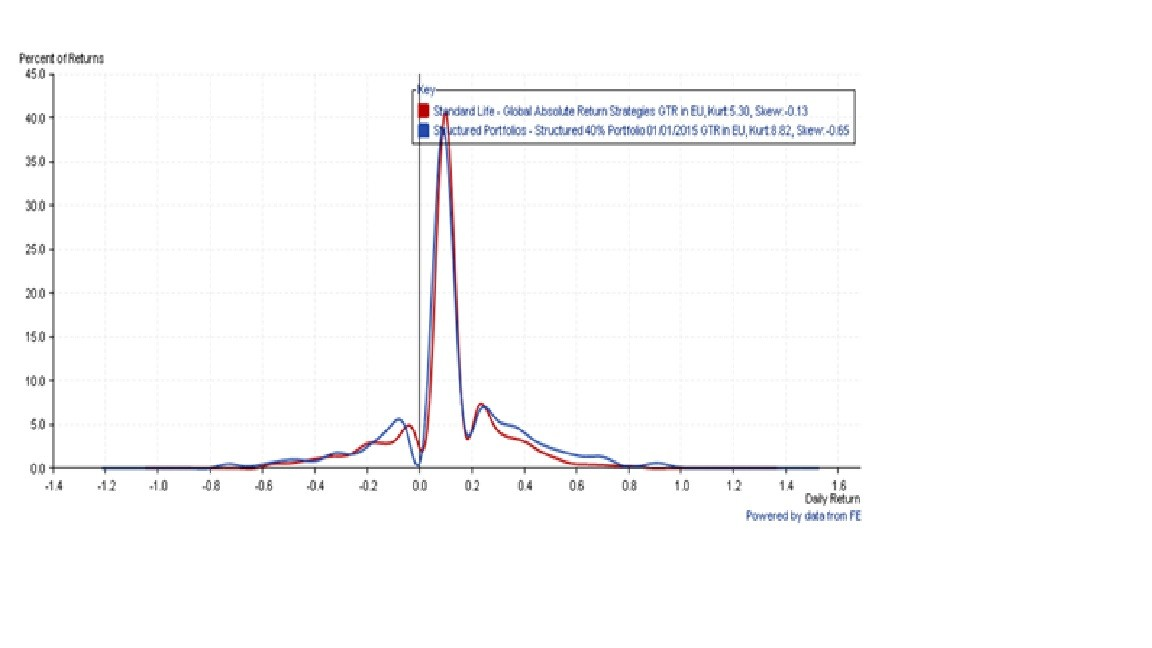 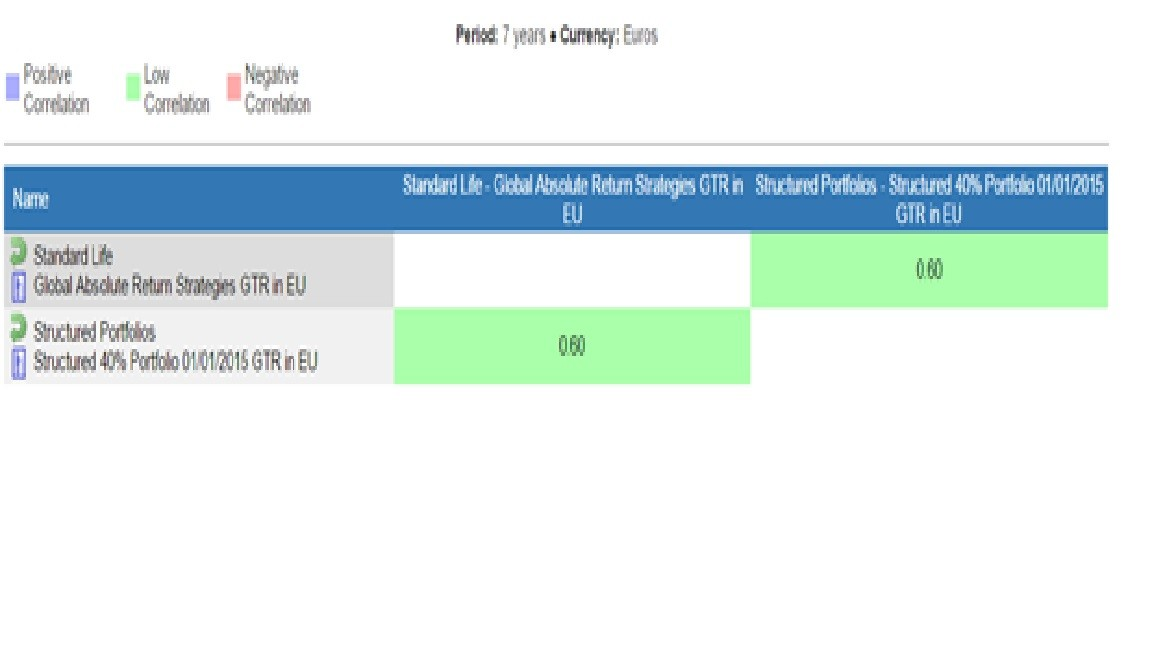 We can see that the distribution of returns and correlations have remained remarkably similar.

However, now look at the difference in performance…. 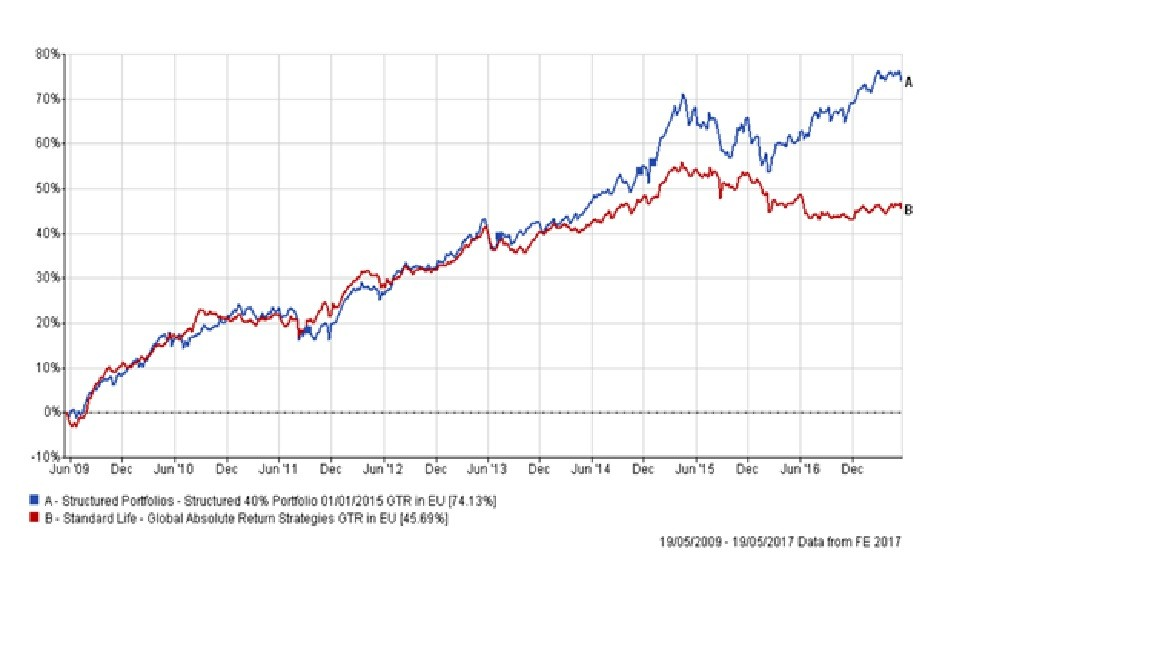 With almost no difference in annualised volatility….. 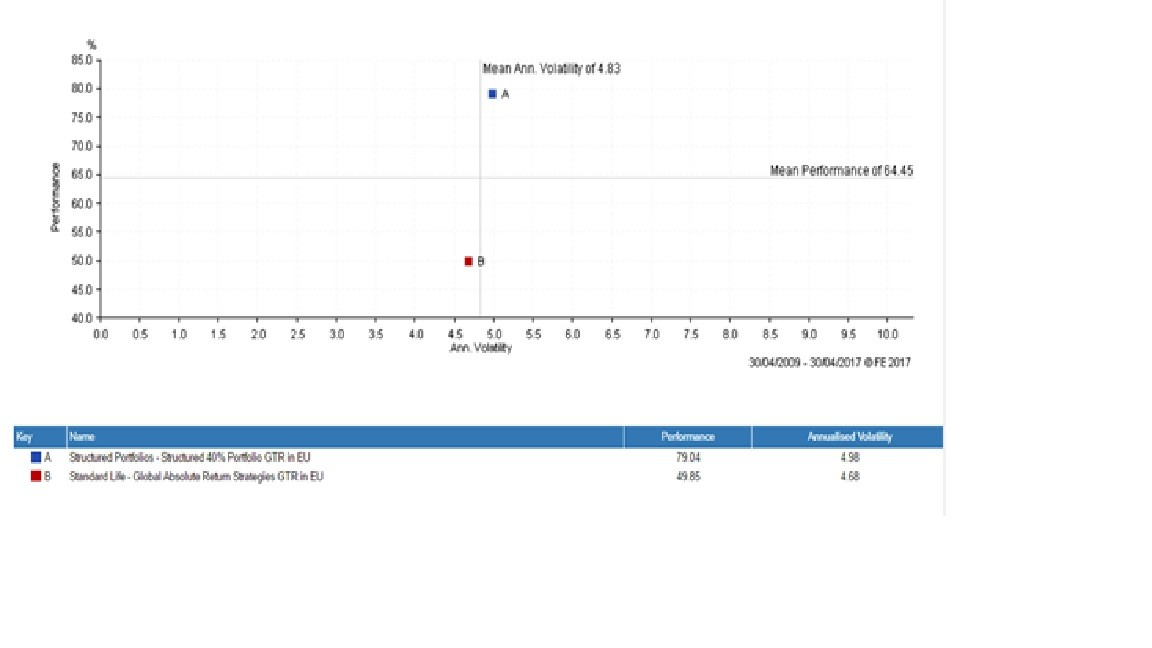 What should we conclude?

It’s difficult to say what might have happened if history had played out differently.

But we can see how Absolute Return and especially Standard Life GARs was able to win over advisers. 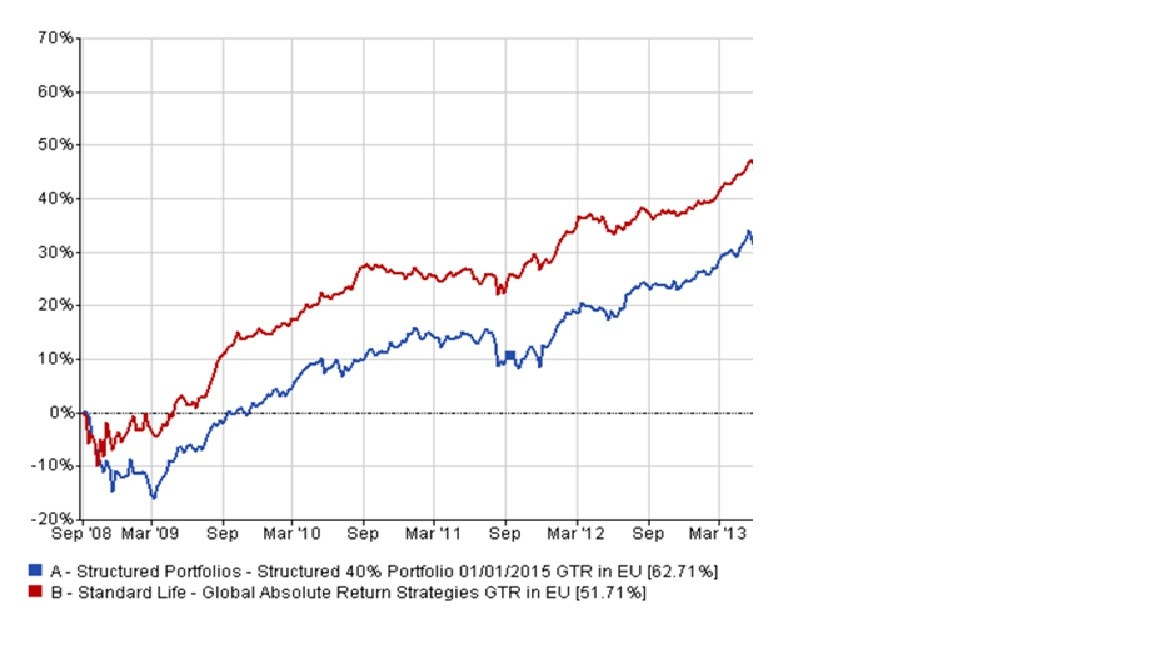 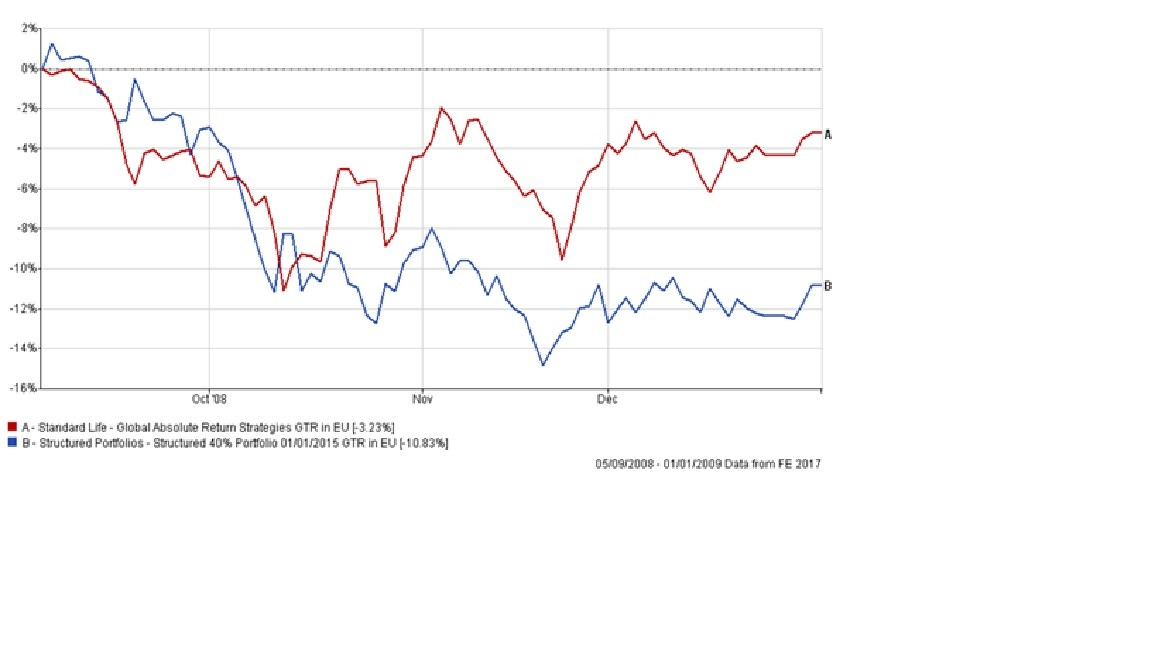 It looks like a lot of the out performance can be attributed to a roughly 2-week period in October 2008. 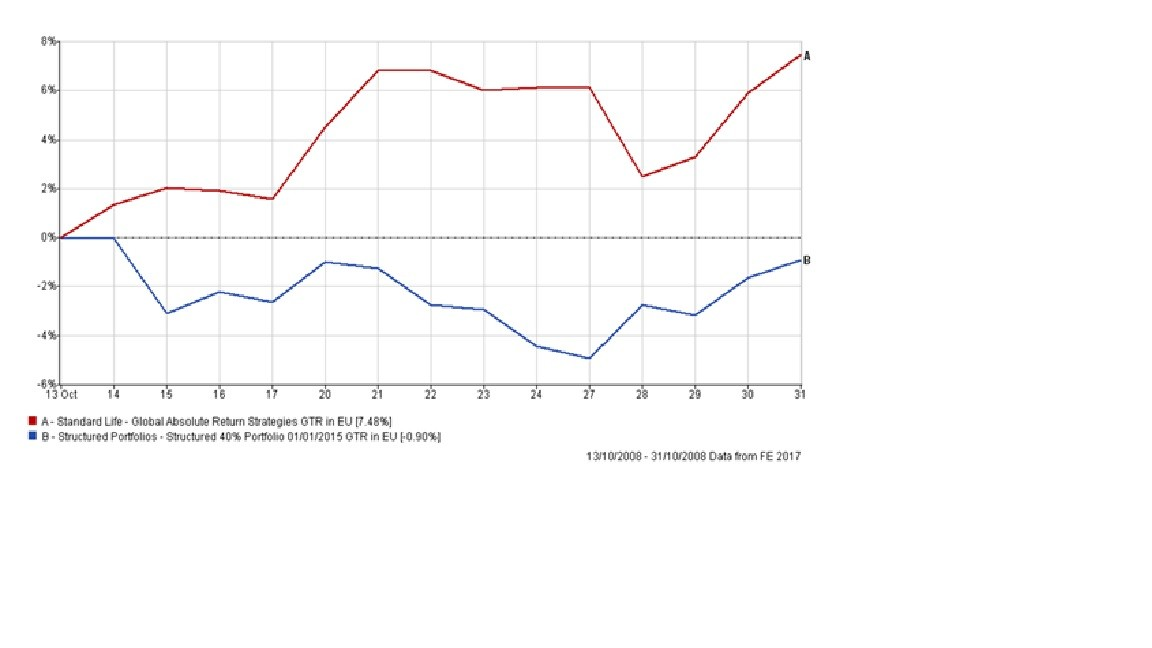 That period seems to be between 13th and 27th October 2008. What happens if we exclude that period, as indeed most actual investors in GARs would have done, given that much of the money flowed in following this period. Let’s rebase to the 27th October 2008 and see how we do? 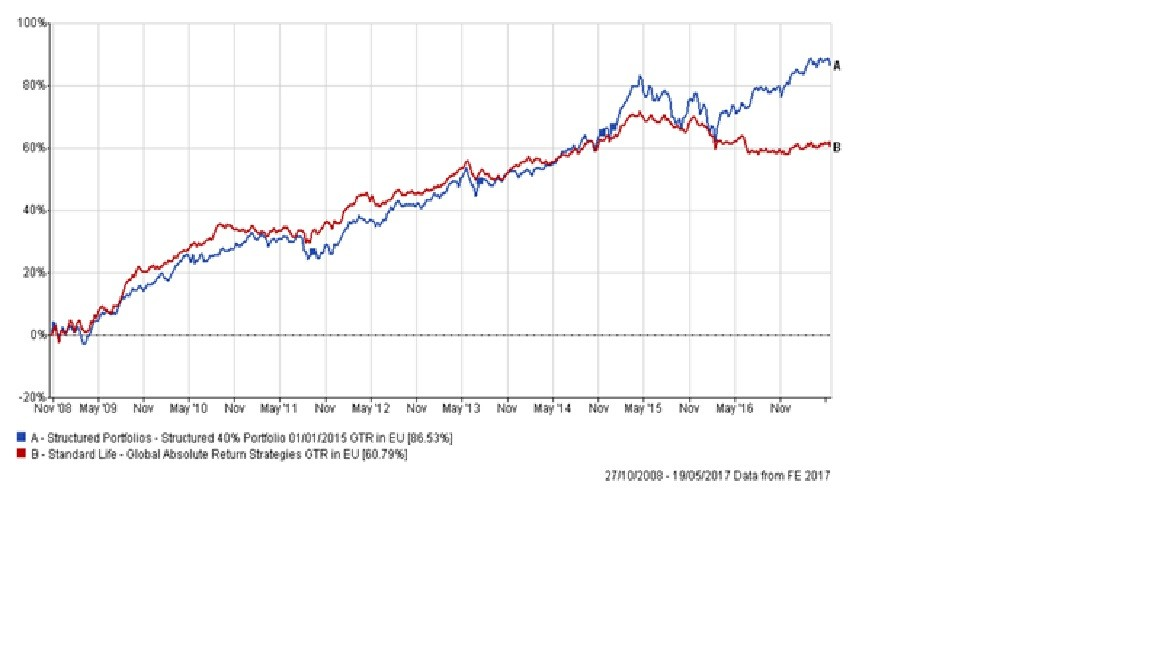 Now we see that a lot of that initial advantage has gone and the relationship between the two strategies is remarkably similar until late 2014 when GARs appears to take a different track.

We might conclude that Standard Life were lucky for a two-week period in late October 2008 and that the more recent performance is just the opposite, bad luck.

The message for investors should be clear. Distinguishing a good marketing story from a good investment process isn’t easy. Just like distinguishing luck from skill in investing. 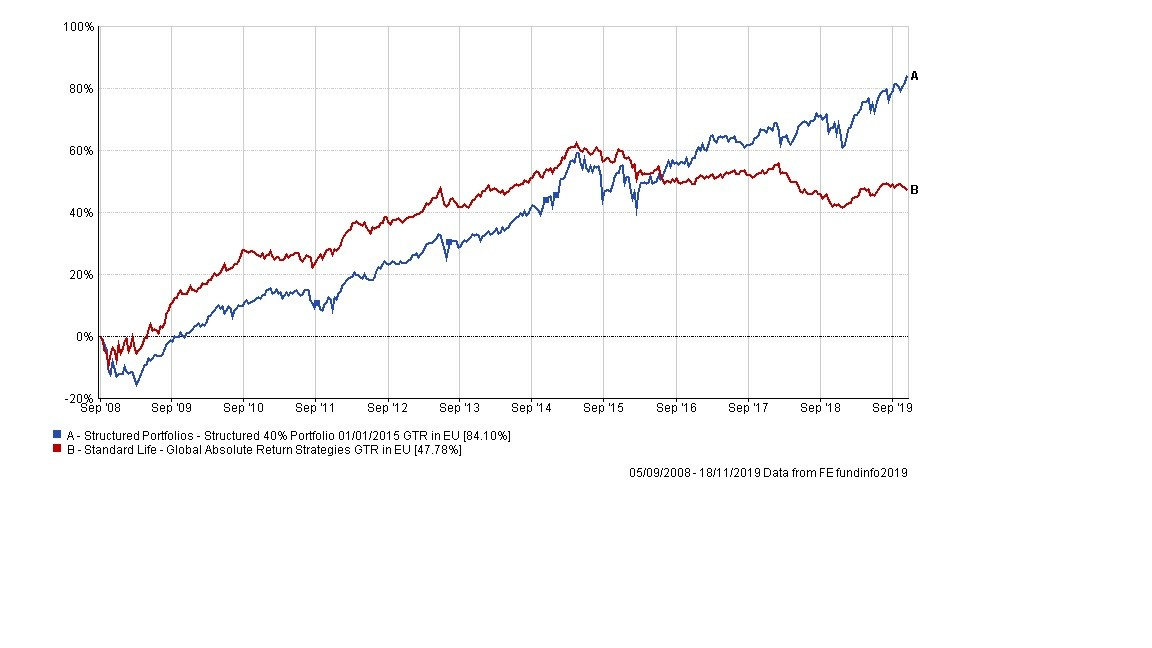 Since we are currently living through a Global Pandemic and parallels made with 2008 I thought it might be a good idea to check in with my original portfolio and see how we are doing. 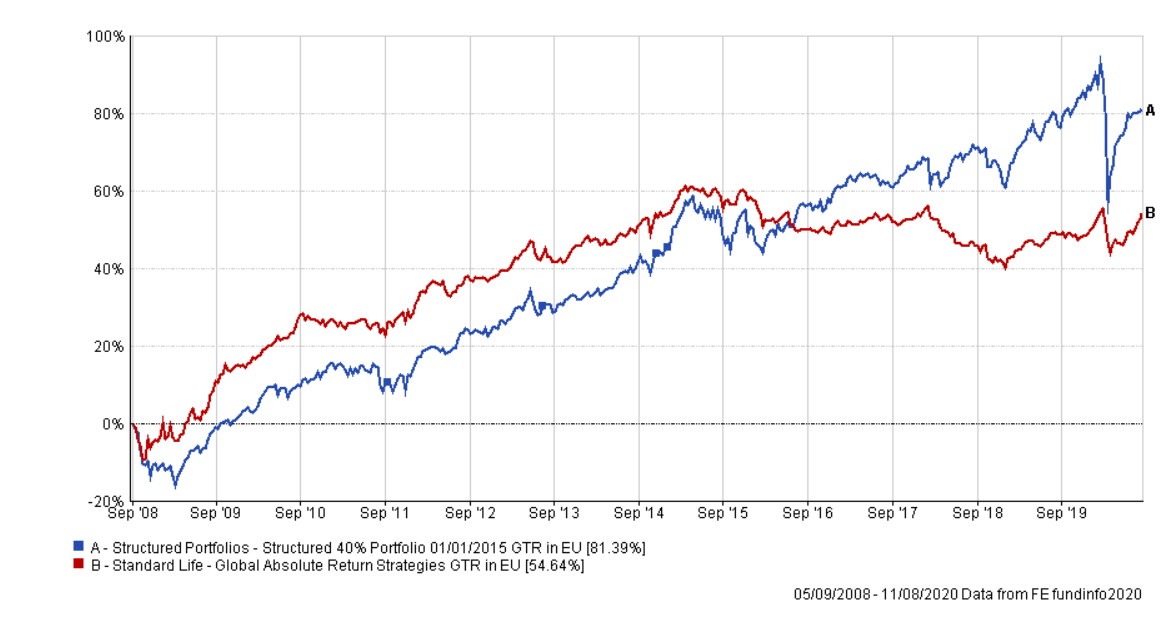 Yep, investors had to endure a drop in the Spring and yes, GARs did drop less as we predicted it probably should but our long term investor is clearly doing better overall.

In fact over the last 10 years ending July 2020, our longer-term passive investor has averaged an annualised 2.89%pa higher return.

Again, as expected the negative skew in our index portfolio (the higher risk driving the higher returns) did indeed result in a larger drawdown in 2020

We can conclude that the absolute return strategy won the battle between 12th February and 16th March 2020, but lost the war between 2008 and 2020.

For educational and information purposes only.

Past performance is no guarantee to future returns

For a second opinion

Think you may have been sold a dog. For a second opinion please use the following

link to schedule a call

[1] The sharp eyed amongst you will note that the market portfolio has a negative skew compared to GARs and therefore GARs should be expected to perform better in the next downturn. But I wonder how many investors will still be in the fund at the time, given the recent performance