“Management is down your throat all the time. They want you to hit your numbers and it doesn’t matter how.” Bank Assurance Financial adviser as reported to CBC 1

I believe that Financial Planning is a Profession that has the power to change people’s lives in profound ways. Yet, sometimes, as the quotation above vividly illustrates, the Financial Services Industry cynically abuses its position of trust.

From the many conversations, I have had with Financial Advisers over the years, I believe that many advisers wish to change their business model. They desire more job satisfaction, working in a more impactful way with a smaller number of clients, they want to be seen as Professionals on a par with Doctors and Accountants and they want to consider their own retirement arrangements and succession planning.

Many of us, as I did, start our careers working for large Banks or Life Assurance Companies. At some point, we decide to leave the Corporate world for life as an Independent Financial Adviser. Over the years that term has become confused in the minds of many consumers. Does it mean not working for a big corporation? Not tied to a single product provider? Not paid by commissions?

New regulations were introduced by the Central Bank of Ireland at the end of March on the subject of financial adviser's remuneration and my thoughts on this subject can be found here.

My personal reference point for this came on September 11th 2001, when I met with a senior director of the FTSE 100 Bank where I was working, having made a proposal that the organisation should raise its game in terms of the quality of advice being provided. To his credit, he agreed with me and said that they had even costed the proposal. The problem was that it was more expensive to do the job properly relative to the amount that was being paid out in compensation. Since the Bank was now owned by shareholders 2, the obligation on the board was to maximise profits. It was simply more profitable to sell products and deal with complaints than to provide good advice. I left the Organisation shortly afterwards.

The bank was then fined, what was at that point, the largest fine ever handed out by the UK regulator and the Bank subsequently blew up during the Financial Crisis of 2008 a victim of its securitised debt strategy. It turned out that the prudent long-term business model of the building society which had worked for 150 years, was more sustainable than funding long-term mortgage obligations on the short-term inter-bank market.

Financial Advice is often nothing more than product sales. Financial Advisers very often have sales targets and, in jurisdictions where it hasn’t already been banned or restricted, investments are often sold based on a commission for selling products.

I’m amazed that so many Professional advisers I have met over the years were willing to turn their back on that business model years before regulation was introduced, recognizing that it isn’t in the long-term interests of either themselves or their clients, and many have moved to a more client-focused model. 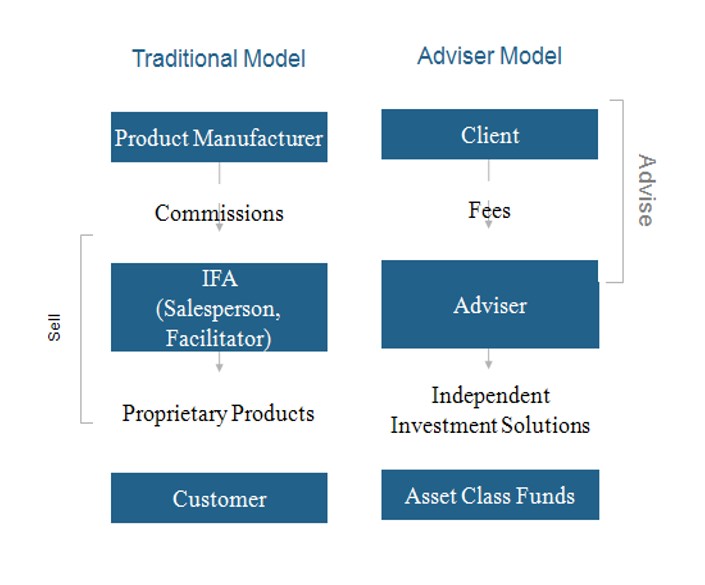 I am also amazed how long it took regulators around the world to recognise the inherent conflicts of interest in the traditional commission broker model. The clear majority of Financial advisers aren’t bad people. But the commission model perpetuates the status quo. Advisers that I speak to complain that they are on a “treadmill” constantly seeking to write new business.

We know this is true because in regions where commissions payable for investment products have been banned, the behaviour of advisers changed dramatically.

“It’s difficult for a man to understand something, when his salary depends on his not understanding it” Upton Sinclair.

I also believe that working with a competent adviser is probably in the best interests of many if not most investors. Several studies have attempted to quantify the value of working with an adviser with estimates ranging from 2% to 3%pa 3 generally considered to be reasonable.

If an asset manager could reliably generate 2% to 3%pa of Alpha they would have books written about them!

For example, a good Financial Planner acts as a “circuit breaker” preventing their client’s natural tendency, encouraged by the financial media, to want to time the market, pick stocks or chase the performance of the latest hot funds.

Leaving aside for the time being social issues such as poverty, the single biggest barrier preventing us from achieving greater control of our financial lives is the person greeting each of us in the mirror every morning.

As Ben Graham, mentor to Warren Buffett said; “the investor’s chief problem and even their worst enemy, is likely to be themselves”. Around half of the adviser value in the Vanguard Study is derived from this behavioural coaching.

Recognising our own shortcomings and limitations is a necessary step to effective financial planning, but more significant than that even; is recognition that people don’t really have financial goals, but rather lifestyle goals that have financial implications.

So, the focus of our service at Global Wealth is on assisting our clients to make smart decisions about their finances and to move the focus away from selling investment products to helping people to achieve everything that is important in their lives, whilst recognising that their own behaviour can be the biggest barrier to achieving this.

One of the best ways to illustrate important concepts is by way of real case studies of clients I have met over the 25 years that I have been a Financial Planner. Some of these case studies are, of course, composites of more than one client, but they are all drawn from real life practical financial planning issues.

My choice for my first case study is Annie’s story. This encapsulates in my view everything that is positive about what we do.

This was very early in my career when I was just 27 years of age and working in a City Center branch of a High-Street Bank in the UK. A young lady was referred to me by Anne the mortgage adviser to make sure that she had adequate life assurance in place to cover the mortgage.

I met with Annie and reviewed her existing arrangements. Her husband was a Pilot in the RAF and I quickly concluded that she had more than adequate arrangements in place with one proviso. The bank that had sold her the life assurance, hadn’t written the policies under trust. So, in the event of a death claim, there would have been a need to apply for a grant of probate with inevitable delays and possible Inheritance Tax implications.

I suggested that she should go back to the bank and ask them to provide a suitable trust deed.

No fee, no fuss. Just good advice that was appropriate for her requirements. It’s sometimes said that pro-bono advice is one of the hallmarks of a Profession.

A few months later Annie called into the office and asked to see me again. She said she had something to show me. I was intrigued.

She produced a small box which she handed to me and I opened it I saw a medal. She said; “I wanted you to see that. It’s what they awarded my husband, posthumously. He died in a plane crash”

I was 27. I was totally unprepared for this. Should I give her a hug? I did, I couldn’t think of anything else to say or do.

I asked; “why have you come back to me?”

“Because when I came to see you, you looked after my interests without any attempt to try and sell me something” she said.

Then she said; “I have something else for you as well.” She handed me a cheque for a very substantial amount. “I’d like you to invest this for us, come and meet the kids”

I didn’t know that she had left her two young children drawing under the supervision of my colleague Mary. So, we left my office to meet the children. The scene that met us was the entire banking staff in floods of tears. The children had drawn a picture of a plane crashing into the ground and a happy smiley face up in the sky.

“That’s my daddy” the youngest said; “he’s in heaven”

I realised in that instant that I was now responsible for the future of a Widow and two young children who had just lost their father.

Good financial planning has the power to change people’s lives. That experience certainly changed mine.

2 In a beautiful irony, the members of the former mutual Building Society had only recently voted to demutualise the organisation in order to trigger a short-term windfall for themselves

3 For example, the Vanguard Adviser is Alpha study